Running with Robyn and a Polar Bear

The morning was unseasonably warm as my sister Robyn and I departed the hotel on our way to Grant Park.  As we headed up Michigan Avenue we decided to grab a cup of coffee at Starbucks before we worked our way to the start of the 33rd running of the Chicago Marathon.  Even though we arrived early, the park was already crawling with people.  Runners of all shapes and sizes, age groups, and ethnic backgrounds filled the park with an energy that was almost palpable.  And in the middle of it all was one six-foot-plus polar bear.  WTH!?!  Obviously it wasn’t a real polar bear.  It was actually a registered runner dressed in a polar bear outfit, head to toe.  He was hard to miss, patiently waiting in line to use one of the many Porta Johns set up for the race.  Okay, sometimes things just don’t make sense on race day but that usually doesn’t happen until late in a race when you are nearly spent, both physically and mentally.  Heck, the battle that day hadn’t even started and I was already puzzled trying to understand why someone would want to dress up in a polar bear outfit and run a marathon.  I just don’t get it.  I found it ironic, too, that he was in line to use a Porta John.  He’s in a park I thought, go find a tree like a real bear.  And so it goes on race day. 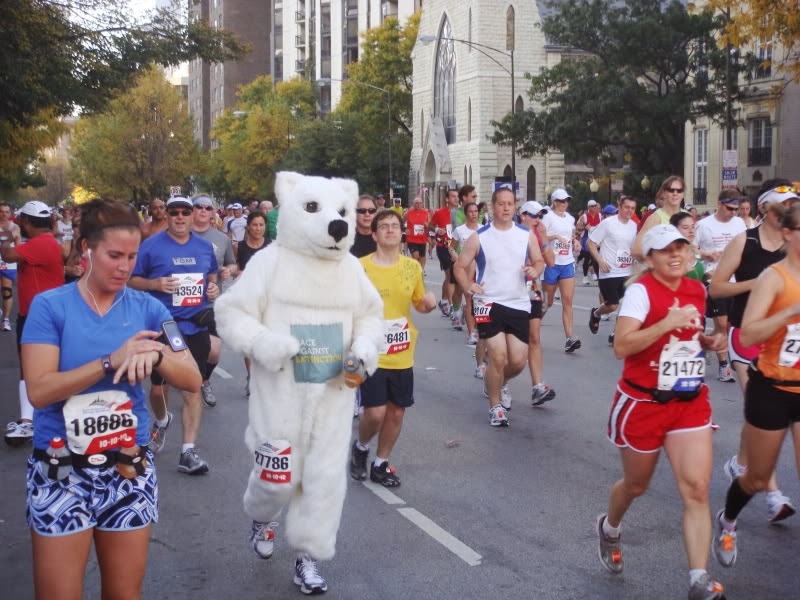 We continued our way through the crowd and found our corral with some time to spare.  We entered, stretched, and anxiously awaited the horn to sound.  When it did we started the slow shuffle to the start.  Starting our watches as we crossed the line, Robyn and I, with another friend from O’Fallon, began our 26.2 mile trek through the streets of Chicago.  We ran.  We talked.  We laughed.  And we ran some more.  The day was gorgeous but it grew warmer and warmer as each mile passed.  Halfway through the race, we found ourselves slightly off pace but feeling pretty good.  At that point we felt we had a legitimate shot at our desired finish time.  However, it was growing warmer by the mile and the heat was slowly taking its toll.  Defiant, we continued our trek through the city. We had no choice really.  We still had a long way to go
Runners say that a marathon doesn’t truly begin until mile 20.  Generally speaking, I believe that to be true.  On this day however, my marathon began at mile 18.  The last 8 miles of this race were pure hell.  Now we’ve all had bad runs, but this was brutal.  It started with my hamstrings and progressed to my quads and calf’s both.  In all my running experience I had never experienced a time when all three cramped at the same time.  It simply hadn’t happened and has not happened since.  And to make matters worse, I wasn’t sure how to handle it.  Bottom line, I was spent!  And we still had 8 miles to go.  Reluctantly I started to walk.  A walk/run approach was the only thing I could do if I hoped to finish the race.  It was there where Robyn stepped in.
I must say, Robyn was outstanding from mile 18 through mile 23.  She was patient and helped me through my struggles.  A couple of times I tried to persuade her to push on and finish without me but to her credit she stuck with me to the end.  She chose wisely.  Had she listened to me and run ahead, she would have not lived to see another sunrise.  You see, though I encouraged her to leave, I secretly planned her untimely death if she chose to do so.  To this day, I’m not sure what would have happened had she left.  But alas, she stuck with me.  She is a great sister and an even better runner.  But something changed in her that day as we covered the last couple of miles of the course.  Suddenly, she was no longer patient and she was no longer encouraging.  She now glared at me, intensely, whenever I asked for a walk break.  She began to mutter under her breath.  She was no longer recognizable.  At one point I’m convinced her head did a complete 360 as she uttered her contempt towards me and my desire to walk.  She had had enough!  “I just want this to end” she snapped.  And there, in the heat of the battle, it dawned on me.  She was no longer human.  Robyn had turned into the polar bear!  She was hurting too.  And she was sick of my whining.  But we continued to run … in silence.  As we turned the last corner and pushed through the final 200 yards not a word was said.  The only sound was my faint whimpering and the cheers from the crowd as we crossed the coveted finish line.  And then, suddenly, it was over.  We finished, together. 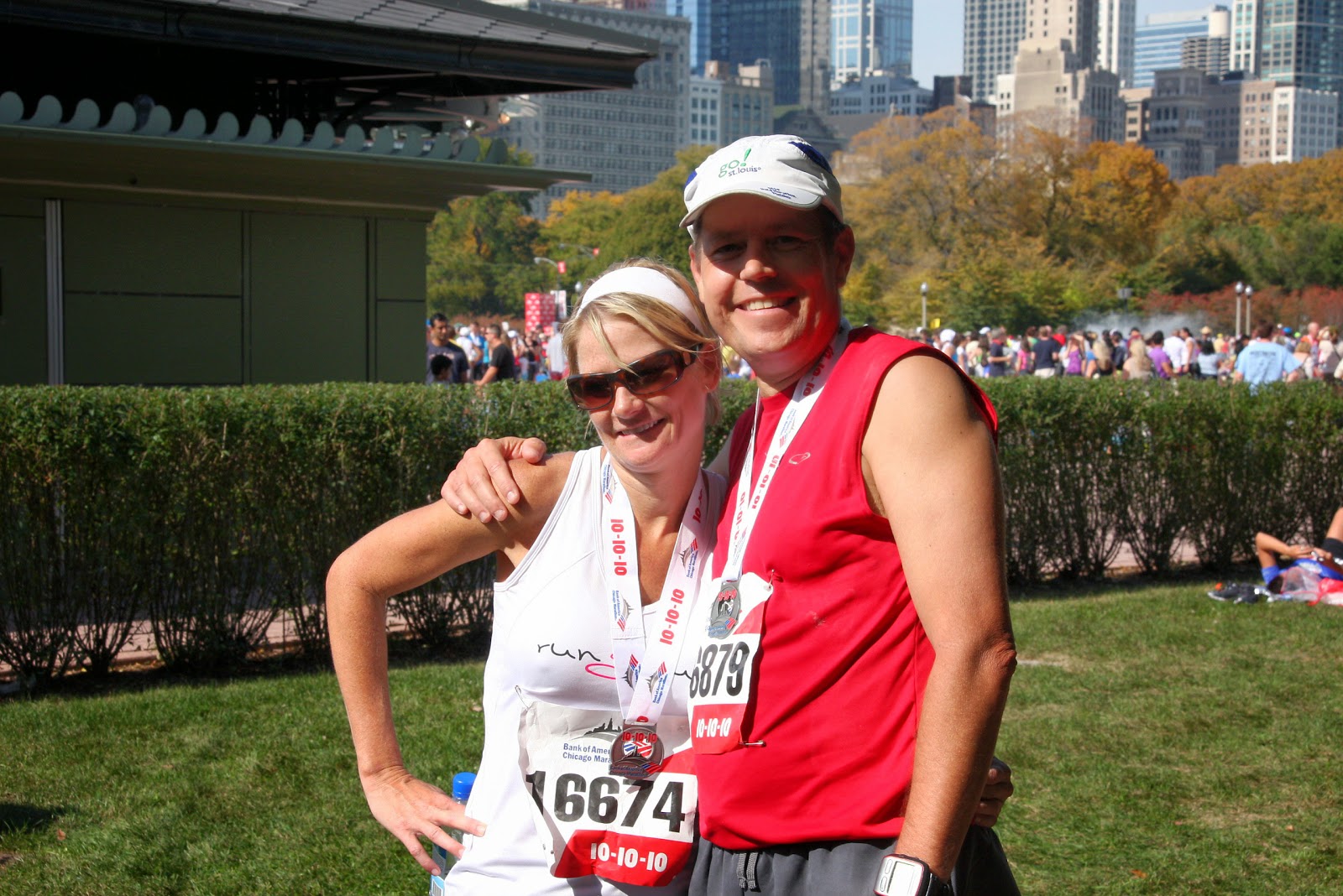 So what did I learn?  First, regardless of how bad it gets on the race course or in life itself, you will succeed if you just keep pushing.  Secondly, sisters are awesome but that can change in the blink of an eye, much like a strong run turning into a nightmare when you hit that proverbial “wall.”  Thirdly, even though I try, I just don’t understand why people want to dress up in outfits and run.  By the way, the polar bear (the real polar bear) finished in 7 hours and some change.  And finally, I learned I will never run another marathon with my sister!  Not because I don’t want to, but because I can’t hang.  She’s awesome.  And sometimes … she scares me! 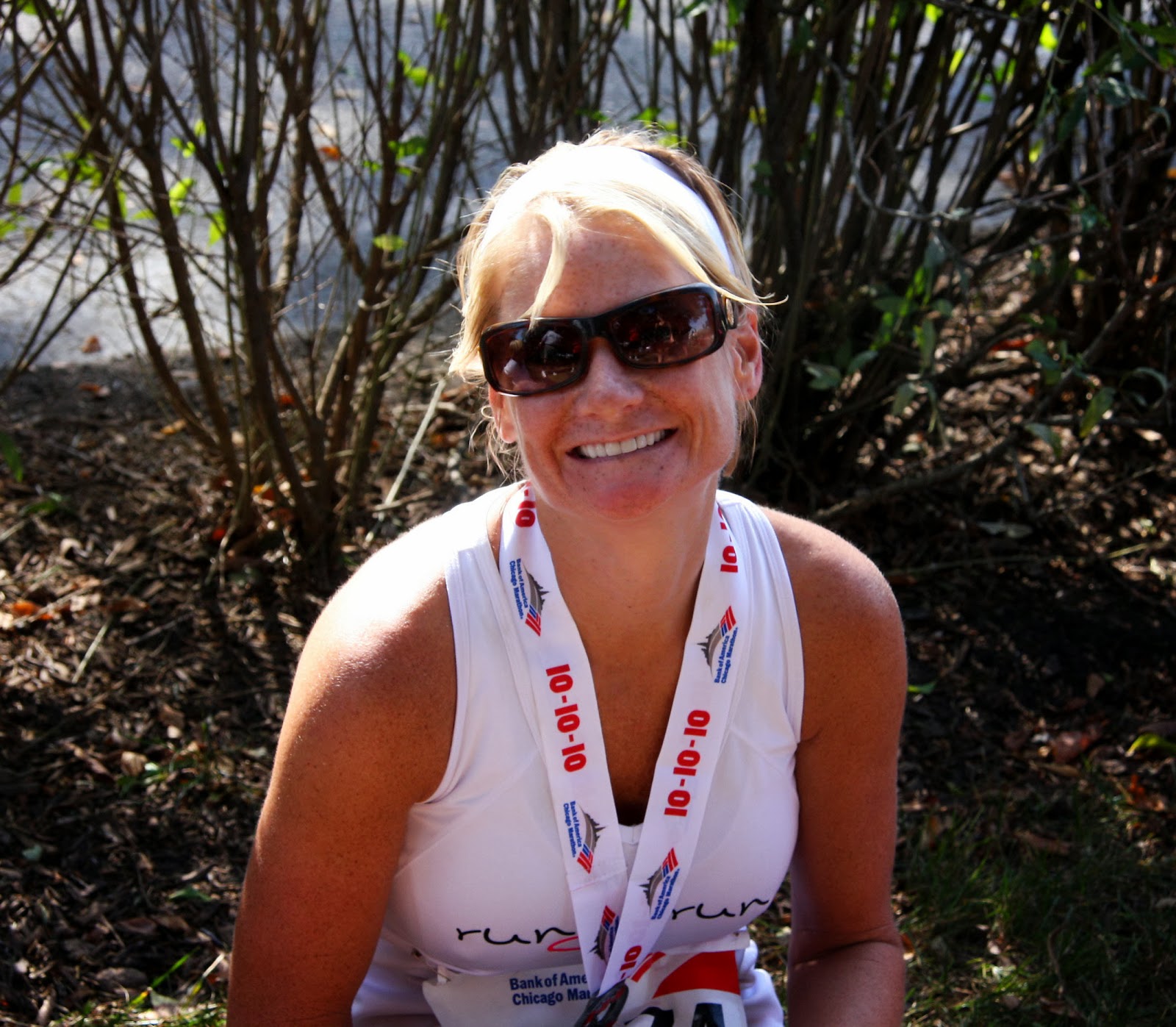 Popular posts from this blog

Running with my Dad...

February 11, 2014
For the two of you who eagerly awaited my explanation of why I won’t run another marathon with my sister, I apologize.   It’s not happening this time around.   I’ve had a busy few weeks and I just haven’t been able to get to it.   I just returned from my second trip to Germany in less than a month (one of which was to Patch) and I’m worn out.   No complaints though.   The trips were great.   However, I promise to get to my sister soon as well as share some thoughts on Patch.   Given that, I want to relay an experience I had last week…        Rarely do I go for a run and not think of my Dad and the impact he has had on my life.   He has taught me many things, one of which is the love of running.   Runners understand that running is a metaphor for life, regardless of your talent level.   Like life, running has its highs and lows.   It can be extremely painful one day and simple the next.    Running teaches you to persevere.   It teaches you to work.   It humbles.   It exalts.
Post a Comment
Read more

December 29, 2021
Mike Frame and I first met on the soccer pitch in August of '83.  I was a sophomore and Mike a freshman at UNC-Pembroke, then known as Pembroke State University.  We quickly discovered we both went to high school in Germany, albeit different schools and became immediate friends.  Our friendship grew over the course of our time at the 'Broke'.  We played soccer together, took ROTC together, and pledged the same fraternity.  We had a lot of laughs back then and I will forever cherish those memories!  Our Air Force careers never crossed paths but we did see each other a few times, the last being Germany back in 2001.  Though that was the last time we met, we did keep in touch over the years.  All of us go through difficult times, some more so than others.  Mike was no different.  He experienced some tragedy but, best I could tell, he handled it with grace and courage.  That's the Mike I knew.  Those who knew Mike always had the same two things to say about him; he was a fa
Post a Comment
Read more

November 06, 2020
I am drawn to black & white images.  I find them alluring.  They can capture the imagination and compel an individual to "finish" the image in his/her mind's eye.  By finish I mean envisioning the image in color.  While this can be an interesting exercise, in the end, more often than not (if not always), the image I form in my mind does not do the actual image justice.  The same can be said for political views. I am a conservative.  My worldview is biblically based and for that I make no apologies.  That doesn't mean, though, that I have it all figured out.  I don't, not even close!  Thankfully, reading scripture and praying for discernment opens my eyes and reveals to me when I am thinking and acting in a self-righteous manner.  Or, if you like, thinking and acting in "black and white".  However, the bible is clear that there are black and white issues and scripture demands we be aware of those ... and to stand firm in their defense!.  But beyond
Post a Comment
Read more